Welcome to Nature’s Aid and the wonderful world of Aloe vera where you will discover the ancient roots and modern health & beauty applications of nature’s most precious moisturizer. The healing gel of the Aloe vera plant has been used for centuries for wounds, sensitive skin, and more! Historians suggest that the Aloe vera plant was first discovered in the warm dry climate of Africa.

Some of the earliest records of Aloe (also known as alew meaning “fragrant resin of an East Indian tree” from the Biblical use of the Latin and Greek root “aloe” and the Hebrew root “ahalim”) were traced to ancient Egypt where Aloe was known as the “plant of immortality” due to its amazing healing properties. The ancient Egyptian civilization considered Aloe to be an esteemed and prized commodity, measuring each citizen’s wealth by the pounds of Aloe plant which they possessed.

Early Aloe vera plantations near the Horn of Africa, around 500 BC offered Aloe as a prized commodity for international trade. In India, the Aloe plant was revered as “the silent healer” and in China Aloe was used for skin rashes.

The Native Americans of the northern hemisphere used Aloe for its emollient and rejuvenating powers and references to Aloe vera are found in the Bible. The Arab traders called Aloe the “Desert Lily” and praised it for its internal and external uses. Discovering how to separate the inner gel and the sap from the outer rind, they crushed the leaves with their bare feet and then put the pulp into bags to dry – creating a fine powder. In Rome, Aloe was used for boils, healing sensitive skin, soothing dry itchy skin, gum and throat irritations, bruising, and wounds. The Spanish explorers of the fifteenth century were credited with bringing Aloe to the new world. 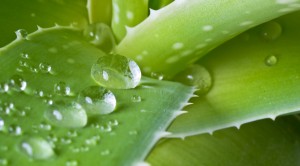 Aloe vera is most potent and effective when fresh. The Aloe leaves when broken off from the rest of the plant, secrete a clear gel that can be applied topically to heal wounds and soothe sensitive skin. For many years modern processing techniques were tried which did not protect the potency of the Aloe plant. However, recent processing “breakthroughs” have now stabilized the leaf gel by using natural ingredients and cold pressing. Sunburn, blemishes, dry flakey skin, anti-aging, diaper rash, and the treatment of gum disease are just a few of the essential day-to- day applications of this awe-inspiring product! We invite you to enjoy the benefits of Nature’s Aid skin gel today and take advantage of Mother Nature’s modern miracle plant – a gift from the ancient civilizations.

Sign up for our Newsletter for the latest Nature’s Aid and natural health news, PLUS receive 20% off your next order.