We are all familiar with the swarms of wasps flying around fairs, festivals and our own backyard BBQ’s. We also know these little pests are more than willing to sting us should we swat at them or get too close. Yet, we always lump the poor bees right in with them – even though they don’t really deserve it.

And while the vast majority of bees and wasps just want to go about their business, ignoring us in favour of flowers, pollens and other insects, Vespid Wasps – which include paper wasps, yellow jackets and hornets – may protect their homes and each other vigorously against the slightest of perceived threats.

Here is what you need to know about bees and wasps, and how to differentiate them: 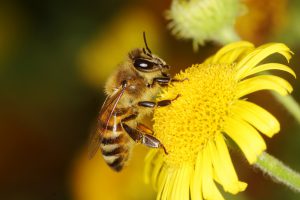 When it comes to bees, most of us picture the big bumble bee but there are actually numerous bee species. The easiest way to tell if you are dealing with a bee or type of wasp is that bees have shorter, thicker bodies and are ‘fuzzy’ whereas wasps have thinner, elongated bodies and are smooth.

Bumblebees are the most easily recognizable due to their large size and also the most likely to sting of all the bees, with the exception of the Africanized honey bee which we don’t have in Canada due to our cold climate. Contrary to common belief (I was shocked to learn this!) bumblebees can sting multiple times, however their colonies are relatively small, rarely topping 100 unlike the thousands of inhabitants in a yellow jacket colony, so they will not come out in droves to protect their nest (which is located underground).

Honeybees nest in cavities, such as beekeepers’ boxes and hollowed out tree trunks and are quite gentle. They will defend their home but only within the immediate area and will only sting as a last resort as they can only sting once and die in the process.

Solitary bees include mason bees, mining bees, leafcutter bees and sweat bees, and rarely sting. They don’t attack in droves and although they may nest near one another underground, they do not form colonies and therefore don’t possess the same territorially aggressive nature.

While yellow jackets, paper wasps and hornets can all be aggressive, yellow jackets are most likely the unwanted guest at outdoor gatherings.

Yellow jackets are most often confused for bees and while they seem to have no true purpose other than to annoy us, they are in fact helpful (when they aren’t stinging us). In early spring and summer yellow jackets feed mostly on insects which helps keep garden pests under control. As the season progresses and their population grows, they start to scavenge and are naturally attracted to sugars, which is why they show up around garbage cans and anywhere that there is food.

The only wasp to nest underground, yellow jackets live in large colonies often containing thousands of inhabitants, all of which will defend their home aggressively from any threat or perceived threat.

Paper wasps and hornets also form colonies, however they nest above ground and don’t scavenge like yellow jackets do, preferring to feed on live insects. This means they are less likely to show up at outdoor functions.

Sign up for our Newsletter for the latest Nature’s Aid and natural health news, PLUS receive 20% off your next order.